Flushing describes episodic attacks of redness of the skin, together with a sensation of warmth or burning. Flush is usually confined to the face and neck; flush can also affect the upper chest and back, however it could still appear elsewhere. Physicians dealing with flush should always take a careful and detailed medical history [1].
The term flush was originally used to describe climacteric flush by Dr. E. J. Tilt, who proposed a short and expressive word for this phenomenon in his publication on menopause in 1857 [2].
The incidence and prevalence of carcinoid flushing has not been deter- mined, however over the past 30 years, the incidence of neuroendocrine tumours has increased more than five fold [3].
About 80% of postmenopausal women experience flushing which is associated with sweating. It can occur years before the menopause, lasting 1–5 years in most patients, and can continue for up to 10 years after the menopause [4]. There is considerable individual variation in the symptoms, frequency, intensity, and duration of hot flushes within and among patients [5].
Flush in menopausal women is considered part of the vasomotor symptoms of dysregulation and could include tachycardia and mood swings or depression [5].
Rosacea or rosacea flush is usually a centro-facial skin redness, affecting patients in their 40s to 60s [6]. It affects both sexes, but women are affected more frequently than men. It affects Celtic white patients more than others, and is rarely seen in Afro-American and Asian populations [7].
Rosacea is relatively common; the exact incidence is unknown but in one study conducted in Sweden it was found that the disease occurred in about 10–14% female, and 5% male [8].

Flush could be divided into: 1. physiologic flushing or blushing, or flushing associated with certain environmental triggers and 2. pathological facial flush; the latter could be further divided into wet flushing or dry flushing [1], al- though the general rule states that a typical carcinoid flush is always dry.
Climacteric flush could be consider- ed physiological or pathological. One should note that nearly one in every five women with climacteric flush are so badly affected that they cannot tolerate these symptoms and seek treatment for them [7] in such instance flush. Flush associated with climacteric transitions should be considered pathological. This juxtaposition illustrates how the physio-pathological life courses are understood to be quite literally discernible in the female body.

Thermoregulation is a complex biological system of neuroendocrine and autonomic structures that may maintain the core body temperature within the thresh- old [9]. This mechanism of controlling core body temperature either by losing or producing heat is well studied [10,11]. The thermo-neutral zone is maintained within speciﬁed limits that can vary rhythmically during the day [9,12].

Three correcting variables play an important role in this bi-directional control circuit:
1. the body core, with reporting of the body core temperature to the CNS via afferent thermo-sensitive signal pathways;
2. the CNS with efferent lines to the spinal column, brain stem, preoptic area (POA), hypothalamus and limbic system;
3. the peripheral vascular system that receives and transmits signals to the CNS [13].

Temperature sensors of body core temperature, among many organs, can be found in the gastrointestinal tract, in intra-abdominal veins and in the spinal cord [14,15]. Thermo-sensitive nerve ﬁbres in the skin as well as in the internal tissues are involved as triggers of thermoregulatory reactions [16]. Thermal information is processed within the CNS, particularly in the anterior hypothalamus with the POA, having pivotal importance in regulating this function [14].
The POA is divided into the medial POA (MPA) and lateral POA [17,18]. The MPA function, among others, is related to the production of gonadotropic releasing hormone [17]. The innervation of MPA is mainly by catecholaminergic pathways, since many noradrenergic neurons and fibres are found in the MPA, which come from different parts of the brain [19], but also dopamine and serotonin activity is described in the MPA [16,20]. Furthermore, structural differences between the two sexes have been described in the MPA in many species of animals and in humans, which are known as sexual dimorphism of the MPA [21] variations that could explain females’ sensitivity to hormonal changes resulting in aggravated vasomotor symptoms. Furthermore, many luteinizing hormone-releasing hormone (LHRH), fibres and neurons were found in different parts of the preoptic hypothalamus, and a study in female rat models has found monomorphic and polymorphic (LHRH) neurons [22].
Warm-sensitive neurons in the POA control the release of heat; effectors in the lateral hypothalamus, periaqueductal grey and in the reticular formation are responsible for peripheral vasodilatation and sweating [23]. The functionally coupled elements of the thermoregulatory control circuit are under catecholaminergic and/or serotonergic control. Serotonergic neurons of the dorsal raphe nucleus of the brain stem project into the POA. Serotonin (5-HT – 5-hydroxytryptamin) 1A, 2A and 2C receptor mRNA is also localised in pre- and postsynaptic serotonin receptors in the POA of primates [24,25]. Noradrenaline signal pathways likewise lead to the POA so that this area receives noradrenergic signals from the solitary nucleus and the locus coeruleus. Alpha-adrenoceptor mRNA has been detected in the POA and in the hypothalamus in rats, as well as β-adrenergic receptors [26].  Vasomotor effectors, that control peripheral vasodilatation and vasoconstriction, are also modulated by noradrenergic and serotonergic signals [27].

Hot-wet ﬂushes represent an excessive reﬂex response to changes in the temperature control circuit. The classical vasomotor system (VMS) of a thermoregulatory dysfunction is typical in menopausal women. A variety of disorders can induce comparable symptoms [28]. With concurrent hypothalamic damage, post-traumatic hyperthermia may result [29–31]. Flushes may occur in patients with breast cancer more frequently and severely than in healthy women [32,33]. It could occur with drugs that act on the oestrogen receptor, and could affect men with prostatic cancer, undergoing androgen ablation treatment [7,5].
Two factors have a significant effect on menopausal flush, the fluctuating level of oestrogen that has a direct effect on VMS and the high level of gonadotropic luteinizing hormone.
1. Oestrogens are potent neuromodulators [28,34]. The hypothalamus and POA are rich with functional oestrogen and progesterone receptors [35,29,30]. Oestrogens control the functional activity of neurotransmitter systems in the POA through speciﬁc oestrogen receptors [31]. If the CNS cannot adapt itself quickly or efﬁciently enough to the fluctuating level of oestrogens, then thermoregulatory dysfunction could result [32]. Studies of POA in animal models have found that oestrogens affect the level of serotonin and noradrenaline, and its pre- and postsynaptic binding sites and the deactivation. It increases serotonin synthesis and slows its degradation [25,33,36]. Plasma noradrenaline levels, before and during the hot ﬂush, are found to be increased [37,38,39].
2. LH rises in serum LH secretion almost always coinciding with increases in core temperature and hot ﬂushes [40]. Many other causes of wet flush have been identified [41].

Dry flushing is the most common symptom of carcinoid syndrome and occurs in more than 90% of patients, while carcinoid syndrome occurs in about 10% of patients [42,43].
Certain peptides have been suggested in the pathophysiology of carcinoid flush. During the flushing episode there is a significant increase of substance P-like immunoreactivity and a mild rise of neurokinin 1 (NK1). In contrast, there is no increase in the serotonin level, suggesting that serotonin may or may not be released into the circulation during flushing [44]. It is important to note that substance P and the NK1 receptor are widely distributed in the brain specifically (hypothalamus, amygdala, and the periaqueductal gray) [45] and they are found in close association with 5-HT and neurons containing norepinephrine [46].
Substance P is a potent vasodilator [47]. Substance P is involved in the axon reflex-mediated vasodilatation to local heating and wheal and flare reaction, and in skin through activation of human cutaneous mast cells by acting on G proteins and protein kinase C resulting in the release of histamine [48]. It has been shown that vasodilatation to substance P is dependent on the NK1 receptor located on the endothelium [49]. It also has bronchoconstrictive properties through the vagal system.
The variations in carcinoid symptoms are attributed to the neuropeptides released by the tumour [50–52]. Tumours of the foregut (stomach, lung bronchi, first part of the duodenum, pancreas) are associated with a bright red geographic flush of a more sustained duration, as well as lacrimation, wheezing, sweating, and a burning sensation. The flush is usually deeper in colour; the hormones involved are believed to be 5-HT, adrenocorticotropin, growth hormone, gastrin, and growth hormone releasing hormone [41,52].
In the midgut (the second part of the duodenum, jejunum, and ascending colon) the flush is believed to be pink red in colour. It is believed that the hormones involved are serotonin, kinins, prostaglandin and neuropeptides including (substance P, substance K and neuropeptide K). Ileal flush, however, cannot be explained solely by the production of serotonin. In ileal tumours, the flush is patchier, intermingled with areas of pallor, and does not last as long. Long-standing flushing may lead to telangiectasia and even facial rosacea [52].
In the hindgut (transverse colon, descending colon and rectum) there is no tendency to flushing [41,51]. Diarrhoea and other gastrointestinal manifestations may precede or coexist with flushing [53].

In the so-called pre-rosacea stage, there is frequent and intense vasodilatation of superficial facial vasculature in susceptible individuals. This brisk flushing can easily be induced by a number of non-specific triggers [54].
The incidence of rosacea is shown to be higher in females, and less frequently in those with skins of a darker colour [55,56]. Studies on the effect of oestrogen on the circulatory apparatus have shown changes in vascular reactivity and structural alterations of blood vessels that participate in vascular growth and remodelling [57]. Furthermore, the incidence of varices is shown to be higher in females, with female: male 6: 1 ratio before the age of 50, after menopause 1.5: 1 [5,58], such evidence suggesting a role for oestrogen in rosacea [59].
In the pathogenesis of rosacea, recent studies have suggested disturbances in an innate immune system in patients who are susceptible to rosacea [60]. Such patients usually have disrupted neurovascular communication, causing a lower threshold response to external triggers which leads to the activation of neuropeptides kallikrein 5, cathelicidin and active peptide, e. g. LL35 FA-29 [61], which in turn leads to increased angiogenesis and increased inflammatory response [62]. The hyper reactivity of innate immunity explains the direct influence of pathogens that have been attributed in the pathogenesis of rosacea [63–67].
Conditions that cause physiological flush are considered as triggers [54]. Overheating can cause physiologic flushing, due to the effect of the rise in blood temperature on the thermoregulatory centre in the anterior hypothalamus. A similar mechanism is responsible for facial flushing which is caused by hot drinks, causing rise in the temperature of blood in the oral cavity. Recent anatomical studies have shown that a large number of neurons in the upper cervical spinal cord and caudal medulla project directly to the hypothalamus; sensory signals that arise in the orofacial area are conveyed via the trigeminal nerve to the brain structure. Hence the centro-facial distribution of flush follows the trigeminal dermatome [52]. After years of transient, prolonged blushing, there is an eventual progression to the vascular stage of rosacea. Steinhoff et al. have illustrated the potential pathophysiology of rosacea integrating clinical, immunological, neurovascular, and molecular characteristics [61].
The differential diagnosis of flush represents a myriad of clinical conditions. Whether the diagnosis is as a result of common or less common causes [52], the cornerstone for diag- nosis is based on considering a careful and detailed history. 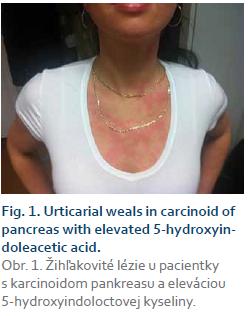 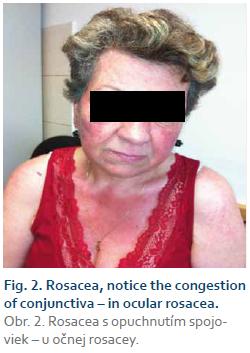 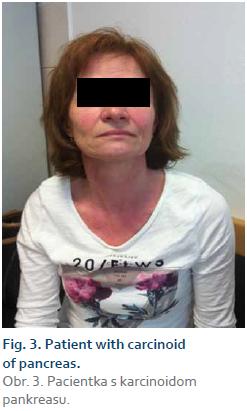 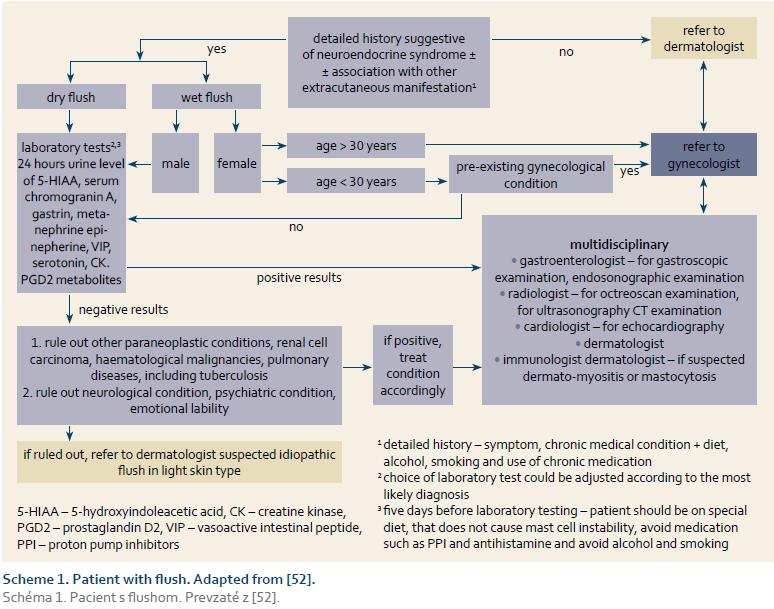