According to the recommendations of The European Crohns and Colitis Organisation (ECCO) diagnosis of Crohns disease (CD) is confirmed by "clinical evaluation and a combination of endoscopic, histological, radiological and/or biochemical investigations"(1). Lack of the one diagnostic tool results from the complex disease phenotype: possible location in every part of the digestive tract, occurrence of strictures and fistulas, wide spectrum of intestinal and extraintestinal complications. A significant part of the initial evaluation of patient with suspicion of CD takes microbiological testing to exclude infectious background of diarrhea. Further, bacteria are one of the factors considered in etiopathogenesis of CD(2). Anaerobic bacteria belonging to the Actinomyces family (A. Israeli and A. bovis) is a proofed causative factor of actinomycosis. This saprophytic organism lives in the upper respiratory tract, the entire digestive tract and oral cavity. Abdominal manifestation of actinomycosis encompasses 10-20% of all disease cases. The most common location in digestive tract is ileocaecal segment and appendix(3). 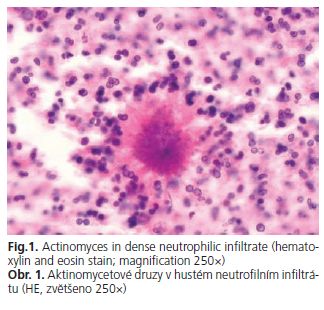 We present case of a 42-years old woman, which was many times hospitalized and treated with antibiotics because of recurring abdominal pain (right lower quadrant) and fever of unknown origin since she was 17. In the age of 23 (1992) the patient was operated because of symptoms of the gastrointestinal obstruction. During the operation the inflammatory infiltration of ileum terminale and enlarged lymph nodes have been found and resected together with an appendix. In spite of clinical and macroscopic suspicion, no features of CD in operative samples were found. Because of persistent symptoms the patient was reoperated and 30 cm long segment of ileum ále was excised. Unexpectedly, a pathological examination revealed presence of Actinomyces in dense neutrophilic infiltrate (Fig. 1). Debecyline for months was administrated. The patient was feeling good for years and in this time was reporting no gastrointestinal symptoms.

In 1997 symptoms of a transient obstruction (attacks of moderate or severe abdominal pain radiating to the right lower quadrant) with fever occurred.

In 2003 the patient was first time hospitalized in Department of Gastroenterology and Hepatology of Medical University in Wroclaw with the initial suspicion of Crohns disease. Biochemical blood investigations, colonoscopy and enteroclysis did not reveal any abnormalities. The patient was effectively treated with ciprofloxacin and considering the past diagnosis of actinomycosis with debecyline. In 2005 the patient was for the second time admitted to this department due to pain in the right lower abdominal quadrant. In colonoscopy a deformation of caecum with multiple scars has been found. Biopsy revealed limfocytary infiltration. The patient was treated with ciprofloxacin with a good effect. 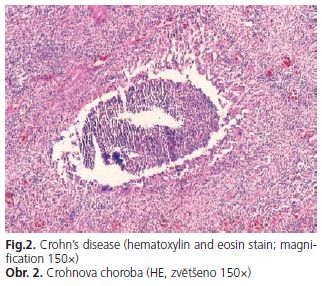 The next exacerbation occurred in 2006. The patient was admitted to the same department as before in severe condition presenting with abdominal pain and fever. Physical examination revealed abdominal tenderness and laboratory test shown high values of inflammatory markers: accelerated erythrocyte sedimentation rate, C-reactive protein, fibrinogen, platelets count and anemia. Microbiological stool tests were negative. Abdominal ultrasonography, computer tomography and barium enema did not show abnormalities. In colonoscopy for a second time deformation of caecum was found. Biopsy was taken for pathological test, that shown chronic inflammation and for microbiological tests (including Actinomycosis), which were negative. The patient was qualified to the surgical treatment. During laparotomy inflammatory tumor of the ileocaecal area with ileal stricture was found. Pathological examination of the excised tumor and ileal segment revealed Crohns disease feature (Fig. 2).

Crohns disease and actinomycosis share common clinical feature - eg. symptoms and location of inflammatory changes in the digestive tract. Moreover a complicated postoperative course may appear, what also corresponds to the presented case. Additionally, both conditions can be a diagnostic challenge for a physician. There is no single test sufficient to establish CD diagnosis and many examinations are recommended, including pathological. Tests used for actinomycosis detection are often ineffective. Typical Actinomyces in neutrophilic infiltration occurs only in 40-50 % of cases. Similarly, culture of Actinomyces Israeli is positive only in 30 % of patients(4). This diagnostic problem can be, at least partly, related to wide usage of antibiotics. Furthermore, recent conception of etiopathogenesis of CD includes infectious factor.

The problem of Actinomyces or other bacterial infection as a causative factor of Crohns disease remains open.