Tumor necrosis factor-α antagonists are currently widely used in patients with moderate to severe Crohn’s disease and ulcerative colitis. Approximately 50% of patients with inflammatory bowel disease who initially benefit from treatment with tumor necrosis factor antagonists eventually lose response. However, the action of the drug and its efficacy are greatly dependent on pharmacokinetics and pharmacodynamics. Therapeutic drug monitoring (TDM) is a new approach that measures drug trough levels and anti-drug antibodies (ADAbs) to optimize treatment and achieve the best strategy in the case of loss of response. Currently, there is no clear cut-off trough level value that corresponds to the clinical response. ADAb production can cause a drop in trough levels or neutralize the drug, resulting in a loss of response. ADAbs can also contribute to infusion and injection reactions, thromboembolic events, and serum sickness. This review examines the evolution of TDM in the treatment of inflammatory bowel diseases. It also explores the main contentions and developments surrounding the use of TDM in recent years, such as trough level and loss of response, and describes the current trends of TDM in clinical practice.

Therapeutic drug monitoring (TDM) is an emerging strategy for achieving optimal biologic therapy by measuring serum drug concentration (known as trough level) and anti-drug antibodies (ADAbs) [1]. TDM is based on the assumption that a systematic and algorithmic assessment of drug trough levels and ADAbs can objectively identify potential reasons for failure in therapy and define the next steps in management, thereby proactively providing opportunities for optimizing therapy and maxi-mizing chances of treatment success [2]. However, the action of the medicament and its effectivity is greatly dependent on pharmacokinetics and pharmacodynamics [3]. TDM may also provide valuable insight into the etiology of undesired outcomes [3]. Based on this theory, trough level may determine the strength of clinical response and, along with presence or absence of ADAbs, the mechanism of treatment failure [2].
Currently, there is no clear cut-off trough level value which corresponds to the clinical response [4]. It has been well documented that trough level is directly correlated with clinical response [5]. However, it has also been demonstrated that high anti-TNF (tumour necrosis factor) trough levels are correlated with an increased incidence of infectious diseases, while low levels may cause inadequate response or production of ADAbs [6]. Vermeire et al. demonstrated that 4th week infliximab (IFX) trough levels of < 4 μg/mL showed an 81% po-sitive predictive value for subsequent formation of high titer anti-TNF antibodies (ATIs); conversely, a value of > 15 μg/mL showed an 80% predictive value for the absence of ATIs [7]. The initial cut-off trough level of 3 µg/mL suggested by Maser et al. [4] has been modified during the last 5 years to more accepted 3–7 µg/mL and 5–10 µg/mL for both Crohn’s disease (CD) and ulcerative colitis (UC) as target values for maintenance therapy [8]. In a recent publication, the American Gastroenterology Association (AGA) recommends 5 mg/mL as the current target trough levels for IFX [9].
ADAb production can cause a drop in trough levels or neutralize the drug, resulting in a loss of response (LOR). ADAbs can also contribute to infusion and injection reactions, thromboembolic events and serum sickness [9]. This review article examines the evolution of TDM in the treatment of inflammatory bowel diseases (IBD). It examines the main contentions and developments in the use of TDM in recent years, such as trough level and LOR, and describes the current trends of TDM in clinical practice.

Trough levels in induction therapy with IFX and primary non-response

In comparison with maintenance therapy, induction therapy with biologics is characterized by a higher drug clearance and largely depends on the baseline inflammatory load [10]. During induction therapy, primary non-response can be seen in up to 30% of patients with IBD, whereas 20 to 40% show partial response to anti-TNF therapy due to the pharmacodynamic and pharmacokinetic factors of the drugs [11]. Primary non-response describes patients who fail to achieve clinical response after the induction phase of treatment [12]. Some patients may take longer to show the initial response. Approximately one third of patients will show the primary non-response in treatment with anti-TNFs [11].
The therapeutic drug window is still largely unknown for anti-TNF induction therapy [10]. However, data gathered in past years, shown in Tab. 1, clearly demonstrate that higher serum anti-TNF drug concentrations during induction therapy are associated with better therapeutic outcomes in IBD [13].

Production of ADAs and LOR  in treatment of IBD with IFX

LOR is considered a LOR at any point of treatment after an initial response has occurred [16]. However, there is no consensus on the criteria for identifying a LOR [16]. While the incidence of LOR is variable, an annual risk of 10% LOR for IFX has been reported. Two thirds of patients develop LOR within the first 12 months, while the remaining patients lose response at a significantly slower pace [16].
In rare cases of treatment with biologics, the patient’s immune system can recognize the molecules as non-self, resulting in the production of ADAbs and quicker clearance of these medicaments, thus decreasing their efficacy and leading to LOR. Production of ADAbs (beside impaired efficacy) may be associated with acute or delayed hypersensitivity reactions [17].
Baert et al. conducted an open-label cohort study on 125 consecutive patients with either fistulising or luminal CD [18] and examined the relation of ATI concentration to median time of relapse, serum concentration of IFX as predictor of time of relapse and relation of immunosuppression with azathioprine (AZA) with higher concentration of trough level (Tab. 3). Importantly, a multivariate analysis showed that scheduled maintenance dosing (< 8 weeks between infusions) and concomitant immuno-suppression independently had a protective value against the development of ATIs. Administration of 200 mg of hydrocortisone pre-infusion reduced the proportion of patients with ATIs (26 and 42%, resp; p = 0.06) as well as their median ATIs concentration (1.6 and 3.4 μg/mL; p = 0.02) in comparison with the placebo [19] (Tab. 3).
A post hoc analysis of the ACCENT 1 study [20] found that scheduled therapy has a lower rate of sensitization and aggressive dose intensification may have overshadowed the negative effect of the formation of ATIs (Tab. 3).
The Sonic trial [21] demonstrated that there is an inverse relationship between co-administration of AZA and the rate of formation of ATIs. Median trough levels of IFX concentration were higher in patients who had undergone combination therapy in comparison with monotherapy (3.5 μg/mL vs. 1.6 μg/Ml; p < 0.001 at week 30), and the presence of IFX was associated with a trend for higher corticosteroid-free remission rates (Tab. 3).
In the COMMIT trail, the role of methotrexate (MTX) was evaluated in the prevention of the formation of ATIs in patients with active CD, treated with IFX and corticosteroid induction therapy [22]. Like AZA, patients who were randomized to receive concomitant MTX were less likely to develop ATIs (4.0 vs. 20.4%; p = 0.01), were more likely to have detectable drug concentration at trough (25.9 vs. 14.0%; p = 0.13), and had a higher median trough serum concentration of IFX (6.35 mg/mL vs. 3.75 mg/mL; p = 0.08) (Tab. 3).
Fay et al., in a recent study on 32 IBD patients treated with IFX demonstrated that the presence of ADAbs was strongly associated with the risk of significant endoscopic relapse [15].
A study including 53 patients with ATIs reported persistence of ATIs in 72% of patients over time, which conferred a two-fold risk of infusion reaction. In the remaining 28% of patients with transient ATIs, antibodies resolved after dose optimization in 20% of them and spontaneously in the remaining 8%. The authors concluded that dose intensification may overcome the formation of ATIs [23]. In a multivariate regression analysis, detection of ATIs was independently associated with disease activity even in the presence of adequate IFX serum concentration. These observations suggest that empiric dose escalation may not overcome the formation of ATIs [24].
On the whole, although a decrease in concentration of ATIs has been observed, whether spontaneously or after dose intensification, these antibodies are generally persistent after their formation [23] and are associated with poorer prognosis [7].

Utilization of TDM in clinical management of IBD patients

Role of TDM in management of LOR
A recent study by Vande Casteele et al. suggested three possible mechanisms of LOR: mechanistic failure, non-immune pharmacokinetic failure and immune mediated pharmacokinetic failure [3].
AGA guidelines on TDM in IBD suggested the possible use of TDM in diagnosis and proper strategy for the management of the three mentioned LOR mechanisms:
1.  Mechanistic failure, which is a lack of response despite optimal drug concentration, is due to the disease process being driven by inflammatory mediators that are not blocked by the administered drug. It can be managed by switching to a drug out of class (swap). In these patients, TDM can show absence of ADAbs and therapeutic drug levels [9].
2.  Non-immune pharmacokinetic failure is a lack of adequate response with an inadequate drug concentration and lack of ADAbs due to rapid drug clearance. TDM can show absence of ADAbs and sub-therapeutic drug levels. In these patients, it can be beneficial to increase the concentration of the original anti-TNF drug [9].
3.  Immune-mediated pharmacokinetic failure is a low or undetectable trough concentration with high ADAbs level. In this case, immune mediated ADAbs are neutralizing the drug. TDM can show an inadequate drug concentration and detectable ADAbs in the patient’s serum. It is recommended to switch the treatment within the same family of the original anti-TNF drug [9].

Role of TDM in maintenance therapy
The only randomized controlled trial (RCT) on this topic is the TAXIT (Trough concentration adapted IFX treatment) trial by Vande Casteele et al., in which patients were first dose optimized to reach an IFX trough concentration of 3.7 μg/mL and then randomized to either proactive TDM or no TDM [3]. Despite the fact that patients with low trough concentration were added to the proportion of patients achieving clinical and biological remission due to initial dose optimization, after dose optimization through TDM, the proportion of patients achieving remission at 1 year with routine proactive TDM vs. no TDM was not significantly different (RR 1.04; 95% CI 0.88–1.24). Thus, while this study demonstrated that initial TDM for dose optimization can be beneficial, it did not show that routine repeated TDM benefited patients at 1 year [9].

Cost-effectiveness of TDM
In a systematic review, Martelli et al. eval-uated the cost effectiveness of a TDM-based strategy. The authors concluded that a test-based strategy with TDM of anti-TNF is more cost-effective than an empirical strategy in both IBD and patients with rheumatoid arthritis, with no negative impact on efficacy [25]. In one RCT, they demonstrated that a TDM-based strategy of dose escalation in CD patients with secondary IFX failure led to cost savings of up to €3,140 at 12 weeks [26].

Currently, TDM is recommended to be performed solely for LOR [9]. It has been shown that TDM is more cost effective than empiric dose escalation of anti-TNF therapy [25] and can better direct treatment in IBD patients [9]. However, before TDM-based algorithms and personalized medicine can be utilized fully in everyday clinical practice, the optimal concentration therapeutic window, ideal clinically relevant time of measurement of drug concentrations (peak, intermediate, trough), and the most suitable assay for both anti-TNF drug and ADAbs should be determined [9].
Current and future perspectives of TDM could include: the development of rapid assays allowing measurement of anti-TNF at the bedside; additional well-designed RCTs with direct patient-relevant outcomes providing a better understanding of the proper cut-off values for anti-TNFs trough levels; ideal measurement times; clinical meaning of ADAbs concentration; comparison of routine proactive TDM with no TDM; and identifying the frequency with which TDM should be performed. Development of software decision support tools that could incorporate a predictive pharmacokinetics model based on individual patient and disease characteristic could assist the decision-making process in clinical settings.


Conflicts of interest
In the last 5 years, Anna Krajcovicova has served as a speaker for MSD, Egis and Takeda.
Tibor Hlavaty has served as a speaker or advisory board members for either MSD, Abbvie, Hospira, Egis, Alfa Wasserman, Pfizer, Takeda and Vifor. Tibor Hlavaty has received scientific grants and unrestricted educational grants from MSD, Hospira and Abbvie. For Yashar Jalali there are no conflicts of interests. 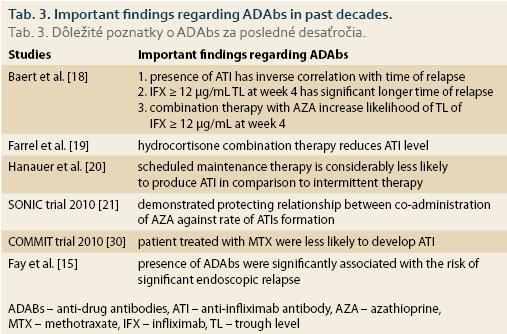