Echinococcosis is a rare parasitic infection in Central Europe. The most commonly affected organ is the liver. There are two types, cystic and alveolar echinococcosis with different types of treatment management. A radical liver resection remains the method of choice in the management of alveolar echinococcosis. We report a case of a 40-year-old woman with an echinococcal alveolar liver lesion successfully treated with a laparoscopic resection of the 5th liver segment. The laparoscopic technique, with all its benefits over open surgery, provides a safe and efficient treatment of selected types of echinococcal cysts located in the liver. It is a mini-invasive surgical approach which enables lower postoperative discomfort, quicker recovery and better cosmetic outcome.

Human echinococcosis is a rare zoonotic infection caused by parasites of the genus Echinococcus. The most frequent clinical forms of the disease are cystic echinococcosis (CE) caused by Echinococcus granulosus (EG) and alveolar echinococcosis (AE) caused by Echinococcus multilocularis (EM) [1]. The reported incidence rate of echinococcal infections in the Czech Republic between 2008 and 2017 was 0.023 cases per 100 000 person-year [2]. In endemic areas, the annual incidence of AE ranges from 0.03 to 1.2 per 100 000 persons [3].
EM is a small tapeworm (1.2–3.7 mm) that infects mainly foxes as a definitive host, and to a lesser extent dogs, cats, coyotes and wolves [4]. Humans are usually infected by food or water contaminated by carnivores’ faeces containing echinococcus eggs [5]. The egg hatches in the small bowel and releases an oncosphere that penetrates the intestinal wall and migrates through the circulatory system into the liver [4]. Primary extra-hepatic locations of EM are rare (1–3%), but EM can spread to other organs by infiltration or metastasis formation [3,6].
In the liver, the oncosphere develops into a larval stage creating multilocular cyst [4]. EM cysts are more poorly limited than EG cysts because there is no sharp separation between the parasitic tissue and the liver parenchyma. The initial phase of infection is always asymptomatic, usually for several years due to slow growth rate. Common symptoms of hepatic cysts are right epigastric pain, nausea, vomiting and jaundice [7].

We present a 40-year-old female patient, who was examined for decompensated hypertension. Concerning her medical history, she had diabetes mellitus type 2 treated by oral antidiabetics and underwent a laparoscopic resection of an ovarian cyst. During the series of tests and examinations, an abdominal ultrasound showed several non-specific lesions of the liver. The magnetic resonance imaging (MRI) of the liver was performed and revealed two small hemangiomas in segments 4 and 8 and one lesion 43×65×80 mm in size located in the segment 5 (Fig. 1A,B). In differential diagnosis, metastatic process or echinococcal cyst were considered. The tumour markers were negative. A serology test confirmed echinococcosis (cystic form). The patient had no relevant epidemiological anamnesis apart from a dog in her household. Regarding the echinococcosis therapy, she was treated with albendazole for 1 year at the department of infectious diseases. During the treatment she started to have intermittent abdominal pain in right upper quadrant. Therefore and in order to exclude dissemination to other organs, she had a positron emission tomography – computed tomography (PET/CT) scan that showed neither a progression of the liver lesion nor a dissemination to other organs (Fig. 2A,B). However, the liver lesion had a more alveolar appearance according to the PET/CT. For that reason, her case was presented at a multidisciplinary committee and a surgical resection was  indicated.

We have decided to perform a laparoscopic resection due to a favourable lesion location. We started by diagnostic laparoscopy, lesion was 8 cm in diameter located in the segment 5 (Fig. 3A), there was no evidence of peritoneal dissemination. Five trocars were inserted in standard positions. The hepatoduodenal ligament was secured by Pringle’s maneuver during the resection. An atraumatic haemostat was used to clamp the hepatoduodenal ligament in order to interrupt a blood flow in the hepatic artery and the portal vein and to control a bleeding from the liver parenchyma during the dissection. A distance between the lesion and the principal plane (Rex-Cantlie line) was too close, therefore a cholecystectomy had to be performed. The liver resection was performed with 2 cm safety margins (Fig. 3B,C,D). An argon plasma coagulation was applied to improve a haemostasis in the liver parenchyma (Fig. 3E). The liver specimen was extracted in a protective bag from suprapubic Pfannenstiel incision (Fig. 3F). An abdominal drain was inserted to control a postoperative bleeding or a bile leak. The blood loss was 700 ml, the operation time  220 minutes.
Postoperatively, the patient could walk and eat 1 day after surgery. There was no bile leakage from the drain. There were no postoperative complications. The patient was discharged 7 days after the surgical procedure. The final histopathology results reported a necrotic liver tissue with an eosinophilic inflammatory reaction (corresponding to parasitic disease) without any evidence of a malignant tumour (Fig. 4A,B). The patient is still on albendazole therapy as a secure postoperative therapy to avoid a recurrence of the disease.

AE is a potentially lethal disease. It is characterised by an initial asymptomatic period of 5–15 years. In the progressive phase, symptoms include abdominal pain, jaundice, anaemia or fever. A later stage is characterised by severe hepatic dysfunctions [8]. Distant metastases to lungs, brain or bones may be seen in the late stage of the disease [6,9]. In our case report, the patient was asymptomatic and diagnosed incidentally during examinations for decompensated hypertension.
The diagnosis of AE is mainly based on a clinical presentation, epidemiological evidence, serology tests and a radiological examination [10]. The MRI or CT scan of the liver are the standard imaging methods. It is also necessary to rule out metastases of the disease to other organs; we performed a whole-body PET/CT scan that ruled out distant metastasis.
Concerning the therapy of echinococcosis, in patients with cystic form, the preoperative therapy with albendazole is recommended, however with no exact treatment duration [3]. This recommendation was initially followed in our patient, too. As she was diagnosed with a CE according to the MRI scan and serology, she received one-year long therapy with albendazole.
On the other hand, in patients with alveolar form, a radical surgery (a liver resection) is the treatment of choice. However, it is possible only in 35% of patients due to a late diagnosis [11]. As the parasite’s growth resembles a malignant tumour, the procedures and techniques (including 2 cm safety resection margin) of oncological surgery are recommended. If a R0 resection is not possible, a palliative surgery is no longer recommended, and the patient should stay on a life-long anti-parasitic drug therapy [8]. A liver transplantation (LT) should be reserved for patients with advanced forms of the disease as a salvage therapy. A pericystectomy (removal of a cyst without a resection of healthy liver tissue) broadly used for CE treatment, is not possible in AE due to a solid nature of the lesion [3,11,12]. There are also percutaneous methods like ultrasound-guided PAIR (puncture, aspiration, injection and respiration) which is sometimes used as an alternative to surgery or if a surgery is contraindicated but only in a cystic form of the disease [13]. Our patient had a superficial lesion in the 5th segment, which was favourable for a laparoscopic, minor liver resection (segmentectomy).
After the first laparoscopic liver resection in 1991, dramatic progress has been made in the field of liver surgery. Nowadays even major liver resections are carried out laparoscopically. When compared to an open liver surgery, a laparoscopic liver resection is more feasible and safer in both benign and malignant liver lesions [14].
There are 20 meta-analyses comparing the results of laparoscopic and open approach. Most studies demonstrate a significantly quicker hospital discharge, an earlier return of bowel activity and lesser requirement of analgesics in patients after laparoscopic liver resections [15].
Postoperative administration of antiparasitic drugs for at least 2 years and a long-term follow-up are mandatory in all cases. The most preferred anti-parasitic drug is albendazole given orally at a dose of 10–15 mg/kg/day. Alternative drugs are mebendazole or amphotericin B as a salvage therapy. A long-term drug treatment is mandatory in all inoperable cases.
According to the current guidelines, a preoperative antiparasitic drug administration is not recommended (except in the case of LT) in AE, however can be considered in special cases (in order to downsize the lesion or to prevent from a parasitic dissemination).

Hepatic alveolar echinococcosis is a rare but a potentially life-threatening parasitic disease that should be considered in a differential diagnosis of liver lesions. If resectable, a surgical treatment should be a method of choice in patients with AE. Moreover, a laparoscopic approach is considered to be safe and effective as presented in our case  report. 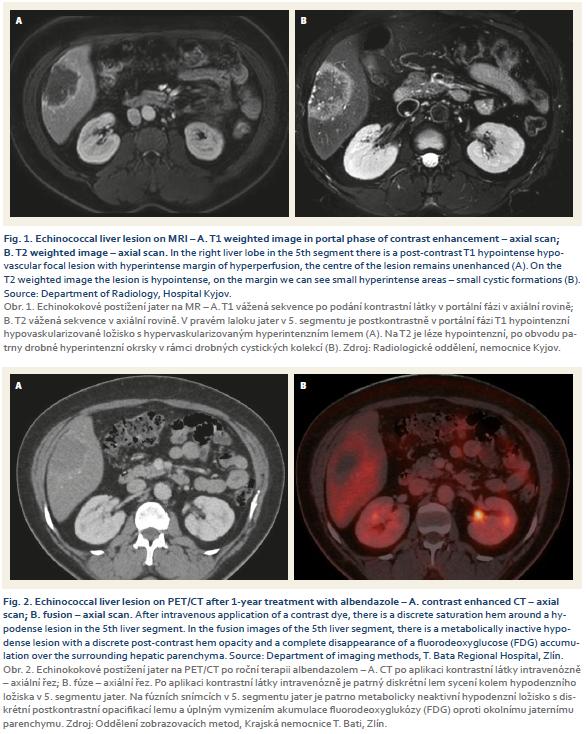 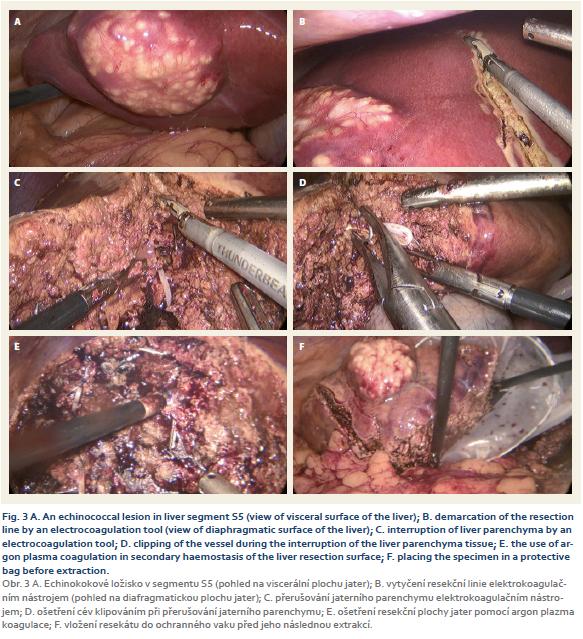 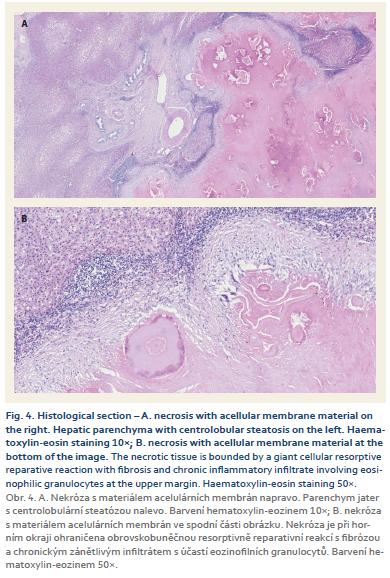