Amoebiasis is the 3rd largest parasitic cause of death in the world. Endemic in the hot and humid regions of the globe, it remains a cosmopolitan affection. Pleuropulmonary involvement is the 2nd most extraintestinal localization of amoebiasis after hepatic localization. We report a clinical case of amoebiasis with hepatic and pleuropulmonary involvement. The diagnosis was made by amoebic imaging and serology. The patient was found to have hepatitis B surface antigen on this occasion. The clinical course was favourable under treatment with metronidazole and needle puncture-aspiration of the pus. The association of extra-intestinal amoebiasis and hepatitis B is not common. It was therefore a question of seeing if there could be a link between these two affections.

Amoebiasis is a strictly human parasitic disease [1]. It is due to Entamoeba histolytica and is related to faecal-oral transmission. It is the 2nd largest parasitic cause of death in the world. Endemic in the hot and humid regions of the globe, it remains a cosmopolitan affection [2]. Pleuropulmonary involvement is the second extra-intestinal localization of amoebiasis after hepatic localization. This complication occurs in 20–30% of the amoebic abscesses of the liver [3]. We report here an observation of hepatic and pleuropulmonary amoebiasis, the diagnosis of which was based on the evocative clinical and radiological data and the positivity of the amoebic serology. The patient was also a chronic carrier of hepatitis B surface antigen (HbsAg) discovered on this occasion. The combination of hepatic amoebiasis and hepatitis B (HBV) is not traditional. A study published in 1991 by Kodjoh on 42 observations of amoebic liver abscess in the medical services of the Cotonou Centre National Hospitalier Universitaire (CNHU) did not mention any cases of associated HBV [4]. It was therefore a question of seeing, through the data of the literature, if there could be a link between these 2 affections.

Mr. B. R., aged 55, a teacher, was hospitalized in our department in July 2015 to explore painful hepatomegaly with fever. His antecedents were without particularity, in this case no alcoholism or smoking, and no viral hepatitis B or C previously known. The history of the disease had begun 1 week before admission with a permanent, moderately intense right basithoracic pain at the point-of-side, radiating into the right hypochondrium, exaggerated by deep inspiration in a febrile context. Associated with this was a productive cough with purulent sputum. The patient had sought consultation in a health centre where, faced with the discovery of painful hepatomegaly, he was referred to our hepatogastroenterology department. On admission to the department, Mr. B. R. presented an altered general state (asthenia, performance status according to the World Health Organisation at 2), a syndrome of systemic inflammatory response (fever at 39°C, tachycardia at 108 beats/min), the blood pressure was 120/80 mmHg and conjunctiva normally coloured. The pleuropulmonary examination revealed a basal right fluid pleural effusion syndrome. Examination of the abdomen revealed painful hepato-megaly with a smooth surface and a foam lower edge, with a 145 mm hepatic arrow on the mid-clavicular line. The rest of the clinical examination was normal. Biological examinations revealed leukocytosis at 18,200 elements/mL (with 85% neutrophils), hypochromic microcytic anaemia with haemoglobin at 7.1 g/dL, and normal platelet count at 156 G/L. C reactive protein (CRP) was 344 mg/L. Transaminases were quietly elevated 1.5 N (upper limit of normal) alanine aminotransferase, 1.75 N aspartate transaminase, bilirubinemia was normal. The prothrombin rate was 80%. HBsAg was positive, anti-hepatitis C virus negative, Human Immunodeficiency Virus serology negative, blood glucose normal and renal status normal. Two blood cultures were negative. The chest X-ray showed a straight pleural fluid effusion of small abundance and a well-limited parenchymal opacity of the right lower lobe. The abdominal ultrasound demonstrated a heterogeneous mass of encapsulated appearance with hypoechoic areas of 71 × 87.7 mm straddling segments V, VII and VIII (Fig. 1). This picture suggested a hepatic abscess (given the febrile context) or partially necrotic hepatocarcinoma (given the context of HBsAg positive). The assessment was then completed by the assay of alpha-fetoprotein which had proved normal (1.14 ng/mL). The thoraco-abdominopelvic CT showed a thick-walled, enhanced mass after injection of contrast medium, surrounded by a hypodense crown (dual-target appearance) in segments VII and VIII. (Fig. 2 and 3). At the pulmonary level, there was an abscess collection of the right inferior lobe with solution of continuity of the diaphragm and a right pleural fluid effusion. Front-end reconstruction showed the contiguity of hepatic and pulmonary abscess with the diaphragm continuity solution. The sagittal reconstruction consisted of a Fleishner atelect-asis band and a right postero-basal frosted glass appearance. A pleural puncture and an echo-guided needle puncture had returned a liquid of pus of chocolate color whose cytology was predominantly neutrophilic but the culture was sterile. The amibial serology by indirect immunofluorescence was positive at 1/1,600 (reagent = IFI Bio-Mérieux, threshold: 1/100). A second serological test by Enzyme immunoassay (reagent = EIA Ridascreen) was positive at 7.2 (threshold = 1.5). Parasitological examination of the stool was negative. The diagnosis of hepatic and pleuropulmonary amoebiasis was then retained. The patient was put on metronidazole 1.5 g/day in three intravenous injections. The pains have gradually decreased, and after 15 days, apyrexia was obtained; CRP decreased to 40 mg/L. The treatment with metronidazole was then relayed orally and continued for a total duration of 21 days. Treatment with tiliquinol-tilbroquinol (Intetrix®) 2 tablets 2× /day for 10 days was then made to eradicate colonic cystic forms of amoeba and prevent recurrence. The clinical and radiological evolution was then favourable. The hepatitis B test showed a low viral load of 120 IU/mL and an APRI (ASAT to platelet ratio index) score of 0.5, and therefore there was no need for anti-HBV treatment but surveillance was instituted. A screening of his entourage followed by vaccination against HBV for the negative cases was recommended. The patient was reviewed every 6 months and no longer reported any complaints, transaminases were normalized.

This clinical case is a classic presentation of extra-intestinal disorders of amoebiasis. However it presents some peculiarities. The 1st is the prolonged course of fever despite well-managed metronidazole treatment and a 1st echo-guided puncture of abscesses. Following a second puncture-aspiration of right hepatic and pleuropulmonary abscess, apyrexia was finally obtained after 15 days. A Cambodian study suggested that oral therapy was superior to the parenteral route with a shorter return to apyrexia and a shorter hepatalgia period [5]. The 2nd particularity was the discovery of a positive HBsAg. The combination of hepatic amoebiasis and hepatitis B is not traditional. A few cases have been reported in India of HBV co-infection in patients admitted for hepatic amoebiasis [6]. Also in India, a case of hepatic ambiase co-infection and acute hepatitis E has been reported in a carrier of HBsAg [7]. The combination of amoebiasis and hepatitis B is therefore fortuitous, linked to the fact that Benin, like India, is an area of high endemicity for both the HBV with an estimated prevalence of 9.9% [8], and for parasitic infections including amoebiasis. Thus any digestive symptomatology should be an opportunity to carry out a screening for the HBV in our area. Note that the study of Kodjoh and Hountondji [4] had not mentioned any case of associated HBV certainly because the search for HBsAg was not done systematically. However, there would be no relationship between the 2 conditions. Firstly, the modes of transmission are different, the amoebiasis has a faecal-oral transmission whereas for HBV the transmission in our area is mainly perinatal, horizontal intrafamily or parenteral or sexual. The question of concomitant transmission would arise if instead of HBV it was the hepatitis A or E virus. Secondly, 1 of the infections probably would not worsen the evolution of the other, indeed the clinical picture of our patient and its evolution was not aggravated. In the literature, no data were reported in this regard [6,7].
Amoebiasis is a cosmopolitan disease. It is the 3rd leading cause of parasitic death in the world after malaria and schistosomiasis [2,9]. Amoebiasis dis-ease occurs in a strictly intestinal form in 90% of cases [1]. Hepatic injury is the most common extraintestinal localization. Clinically, it performs a classic pic-ture of abscess with fever, hepatitis and hepatomegaly. The intestinal phase (classically made of dysentery syndrome without fever) may be missed clinically [10]. In our patient, no intestinal symptomatology preceded the occurrence of abscess. Biologically, during amoebic abscesses of the liver, the difficulty of highlighting Entamoeba histolytica in stool or other samples is a fact [10]. And this was the case of our patient on the cytobacteriological examination of pus.
Pleuropulmonary involvement is the 2nd extra-intestinal localization of amoebiasis. Pleuropulmonary amoebiasis is not uncommon, especially in Africa where the prevalence of carriage ranges between 2–40% [11]. Its frequency is estimated to be 0.29% in a pneumology department in Abidjan [12] with predominant male involvement. Respiratory manifesta-tions observed in subjects with amoebiasis initially report satellite-related abnormalities of hepatic abscess in 80% of cases and true thoracic contamination in only 20% of cases. This pleuropulmonary localization of amoebiasis is rarely secondary to a blood circulation of amoebae from the intestine most often it is secondary to known or discrete hepatic amoebiasis and results from diffusion or intrusion of hepatic abscess through the diaphragm [13]. This last so-called transphrenic pathway could explain the predominant right side localization as it is the case in our observation. The thoracic contamination then testifies to a transphrenic break-in of a hepatic amoebic abscess by rupture in the pleural compartment either ‘in free pleura‘ with the constitution of amoebic pleurisy, or ‘in symphyseal pleura‘ with direct contamination of the lung. The various reaction abnormalities found at the pleuropulmonary plane are at least blunting of the costodiaphragmatic cul de sac and pleural effusion in 30% of cases, an elevation of the diaphragmatic hemicoupol in 27% of the cases, atelectases in bands (called Fleischner) in 13% of cases [14].
The pleural puncture or drainage of the abscess is a key examination in the diagnosis. We usually get a chocolate coloured or purulent liquid in which the amoeba can sometimes be found [15] which is not the case in our patient.  In abscesses amoebas are to be found in the walls because they are rare in pus. In the pleural fluid, the chances of visualizing the pathogen are even slimmer, of limited value [16] and reach less than 10%, which underlines the need to warn the laboratory which will mobilize preferably its ‘informed readers‘ [10].
Serology is an important contribution to the diagnostic aid in deep localizations, particularly hepatic or pulmonary ones. The nomenclature requires the use of at least two of the following techniques: agglutination, haemagglutination, indirect immunofluorescence (IFI) and enzyme-linked immunosorbent assay. A positive reaction equal to or greater than 1/320th at IFI is an argument in favor of visceral amoebiasis [10]. These serological tests are positive from the 7th day of infection and detect antibodies in 85–95% of patients [17].
The treatment of amoebiasis is primarily medical. The treatment regimen is identical to other amoebiasis sites and is based on a tissue amoebicide derived from 5-nitroimidazole such as metronidazole at a dosage of 500–750 mg 3× /day for 7–10 days. This treatment must be supplemented by intestinal deworming with a contact amoebicide, such as tiliquinol-tilbroquinol at the dosage of 4 capsules per day for 10 days. Surgical treatment is reserved for chronic sequelae (chronic abscesses, pachypleuritis, pleuro-bronchial fistulas etc.) [3].
As a faecal peril disease, amoebiasis can be prevented by collective measures (drinking water, hygiene in the field) and individual (washing hands); there is no vaccine available yet. The prevention of HBV is based primarily on the vaccination at birth of all newborns, the screening and vaccination of those at risk, the application of measures preventing parenteral and sexual transmission.

The association HBV and amoebiasis hepatitis is fortuitous, linked to the fact that Benin is a zone of high endemicity for both conditions. HBV research should be systematic in our context in front of any trailing asthenia or any case of digestive disorder even when another etiological diagnosis would seem obvious. Appropriate preventive measures must be applied to reduce the frequency of these 2 conditions in our country. 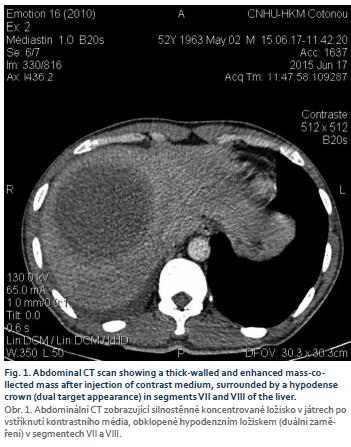 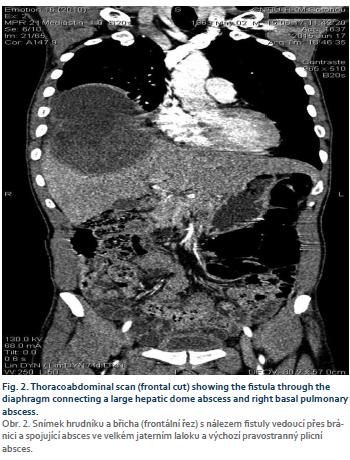 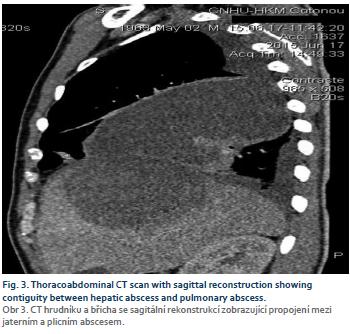