Watermelon stomach as the first symptom of liver cirrhosis

Background: Gastric antral vascular ectasia (GAVE), so-called watermelon stomach, is an uncommon cause of refractory gastrointestinal bleeding or iron deficiency anaemia with unclear etiology. GAVE is associated with a number of conditions such as portal hypertension, chronic kidney disease and collagen vascular diseases. Most commonly GAVE is diagnosed during gastroscopy. Red antral stripes radiating in linear arrays in the antrum are the most characteristic endoscopic feature. Furthermore, the clinical course and histological changes are equally important in the diagnostic process. The treatment of GAVE is based on medical, endoscopical and surgical methods. Case: We present an unusual case of GAVE which was the first symptom of liver cirrhosis detected intraoperatively during a gastric resection due to recurrent blood loss. The liver biopsy taken confirmed the diagnosis. Before the surgery, numerous laboratory tests, computed tomography scan, and abdomen ultrasound were performed which did not indicate liver disease.

Gastric antral vascular ectasia (GAVE), so-called watermelon stomach, is an uncommon but important cause of severe acute or chronic gastrointestinal blood loss. It occurs more frequently in women than in men, typically in middle- to old-aged females [1]. We do not yet have enough knowledge on this topic [2]. GAVE’s etiology remains unclear. The immunological background might play a role in the cause of watermelon stomach. GAVE is more frequently present in such conditions as systemic lupus, scleroderma, systemic sclerosis, pernicious anaemia and primary biliary cirrhosis [3].
The diagnosis is based on an endoscopic pattern and for doubtful cases on histology. Telltale watermelon  stripes are a pathognomonic endoscopic pattern [4] as GAVE is characterised by longitudinal rows of ecstatic twisted mucosal vessels in the antrum [5]. Enlarged submucosal vessels may erode through the gastric mucosa, causing chronic blood loss and consequently anaemia [6].

We describe an unusual case of GAVE. The 66-year-old man with hypertension was admitted to the Department of Gastroenterology and Hepatology after being observed for the previous six months with anaemia, with a lowest haemoglobin level of 6 g/dL which required many blood transfusions. From gastroscopies performed during hospitalisation, haemorrhagic inflammation of antrum and cardia was diag- nosed. The colonoscopy was normal. The blood test performed on admission revealed iron deficiency anaemia with a haemoglobin level of 10.0 g/dL, a haematocrit of 32.9%, thrombocytopenia, normal hepatic function and slightly prolonged prothrombin time. The gastroscopy performed during hospitalisation indicated a suspicion of GAVE as a diagnosis, as the endoscopy revealed erosive gastritis, with numerous erosions in cardia and antrum, with thickening of the gastric folds. Changes were also located within a diaphragmatic hernia.
During the procedure, tissue samples were collected for histopathological analysis. GAVE syndrome was considered as a cause of recurrent anaemia from gastrointestinal blood loss. Due to a GAVE diagnosis, the mucosa was cauterised and ablated using argon plasma coagulation (APC). The patient was discharged, with a recommendation of taking proton pump inhibitors and Sucralfate. After three weeks the patient was admitted to the clinic for a check-up. In blood morphology the haemoglobin level was stable (11.5 g/dL), but there was no visible improvement during the gastroscopy as the images were similar to those from three weeks before. A contrast computed tomography scan of the abdomen revealed a thickening of the pyloric antrum wall and hepatosplenomegaly. Due to recurring anaemia with a haemoglobin level of 5.7 g/dL and exhausted conservative treatment options, a few months later the patient underwent a total gastrectomy and cholecystectomy due to gallstones. Intraoperatively, liver cirrhosis was noticed, and a biopsy was taken. A histopathology exam confirmed GAVE, chronic active hepatitis and advanced fibrosis on the border of necrosis (incomplete cirrhosis).

Rider et al. were the first who described GAVE in 1953. They analysed the case of a patient with chronic iron-deficiency anaemia. The gastroscopy revealed changes in the antrum. It was “fiery red with specific hyperthropic mucosal changes”. Chronic inflammation and an oedematous submucosa with dilated veins were noticed under the microscope [7]. The term watermelon stomach was first reported by Jabbari et al. [8].
GAVE is typically located in the gastric antrum, although sometimes and uncommonly it may be noticed in the cardia. Involvement of the proximal part of the stomach is also rare and unusual [9,10], but in our case it actually occurred and was located within a diaphragmatic hernia.
It is estimated that GAVE causes up to 4% of non-variceal upper gastrointestinal bleeding, as shown in a prospective study of 744 patients; 31% of these also had portal hypertension (PHT). Patients with coexisting GAVE and PHT have more diffuse gastric angiomas in endoscopic view [11].
Watermelon stomach is more common in certain health conditions such as hepatic cirrhosis, chronic renal failure, hypertension, chronic pulmonary disease and diabetes. Furthermore, it is also related to some autoimmune disorders such as Raynaud’s phenomenon, rheumatoid arthritis, polymyalgia rheumatica, primary biliary cirrhosis, and systemic sclerosis – both diffuse and limited [9,12]. Among the patients with GAVE antinuclear antibodies, anti-centromere and anti-RNA helicase II were detected [13]. There is a theory that states that those antibodies could cross-react with proteins in the mucosal and submucosal layer of the stomach [2]. Various studies show that there are some risk factors of GAVE. For instance, hypergastrinaemia, proliferation of neuroendocrine cells, changes in hormone levels of prostaglandin E2 (PGE2), 5-hydroxytryptamine and vasoactive intestinal polypeptide may be a cause of the development of GAVE [14]. The loose connection between the distal gastric mucosa and muscularis externa may be one of the possible causes of GAVE [15]. Some authors suggest that strong peristaltic movements may result in prolapsing of the antral mucosa. It can lead to blood vessel obstruction resulting in secondary fibromuscular hyperplasia and vascular ectasia [16].
About 30% of patients with GAVE have liver disease. The prevalence of GAVE in liver cirrhosis is nearly 2–3% of patients [17–19]. In our patient the cause of GAVE was at first unknown as he did not suffer from any disease which might predispose to watermelon stomach. GAVE was the first sign of identified intraoperatively liver cirrhosis, which was confirmed by histopathological exam of liver biopsy.
Chronic anaemia occurs frequently in cirrhotic patients [18], so it is important to perform a differential diagnosis and identify the cause to administer appropriate treatment. Patients can develop both GAVE and portal hypertensive gastropathy (PHG) but these are two different conditions which can cause gastrointestinal bleeding among patients with liver failure [20]. GAVE is located in the antrum, and PHG in the fundus and body of the stomach [19].
PHG is more common among liver cirrhosis patients with a prevalence of 20–80% and develops in the background of PHT [21]. The hepatic venous pressure gradient is related to the presence and severity of PHG [22].
The pathophysiology of GAVE is still unclear, nevertheless it is indisputable PHT is not involved in GAVE development, as it has been reported to occur in non-cirrhotic patients. It can be absent in up to 70% of patients. The reduction of PHT also changes the course of the disease [23]. Furthermore, it has been reported that liver transplantation, despite constant PHT, generates disappearance of the antral vascular lesion. The relationship of GAVE with liver insufficiency remains unclear but it seems to have a more significant role. It is possible that liver failure changes the metabolism of as yet unidentified substances [19].
Telltale watermelon stripes are the pathognomonic endoscopic pattern for GAVE [4], while a PHG endoscopy reveals snakeskin mucosa with diffuse red or brown spots, usually in the funds or gastric body, but sometimes a biopsy is required to differentiate GAVE from PHG [24]. In PHG, histology reveals dilated submucosal and mucosal veins, along with ectatic capillaries without inflammation or thrombi [21]. In GAVE, the presence of intravascular fibrin thrombi, mucosal inflammation, fibromuscular hyperplasia of lamina propria, epithelial regeneration, and mucosal architectural distortion is shown [25].
In the treatment of GAVE we use pharmacotherapy, endoscopic procedures and, in some cases, also surgery. However, refractory GAVE still presents a therapeutic challenge. The most common surgical type of GAVE treatment is antrectomy. There are no cases of recurrence of bleeding in the postoperative period observed. The disadvantage of this surgical approach is a high risk of mortality and morbidity. Portacaval shunts are not recommended in the treatment of GAVE [5]. The gold standard is endoscopic treatment. One of the most popular endoscopic approaches is Neodymium: yttrium-aluminium-garnet (Nd: YAG) laser or APC. The others are endoscopic band ligation, sclerotherapy with polidocanol [6] and radiofrequency ablation [26]. Another endoscopic method used to treat GAVE might be cryotherapy. It seems to provide encouraging results but larger, prospective studies are still needed [27].
The treatment of PHG is based on pharmacotherapy to reduce hepatic venous pressure gradients. The first line of treatment is non-selective  β-blockers [19]. The efficiency of hormonal therapy – estrogen-progesterone, a long-acting somatostatin analogue – octreotide, methylprednisolone cyclophosphamide was also assessed. None of them appear capable of effectively controlling GAVE-related bleeding [2].

GAVE can be a rare cause of chronic gastrointestinal bleeding which we should consider when we exclude other causes. The diagnostic process and therapeutic management of GAVE, however, still remains a challenge, as endoscopic images are not always distinctive. GAVE can be associated with PHT, chronic kidney disease and collagen vascular diseases.
One third of patients with liver damage have detected GAVE, therefore it is important to consider that a differential diagnosis of PHG may also coexist. Both of these conditions can cause anaemia. The treatment of GAVE is often ineffective, despite  using pharmacotherapy and endoscopic procedures; recurrent bleeding has been observed and in some cases a gastrectomy is needed. 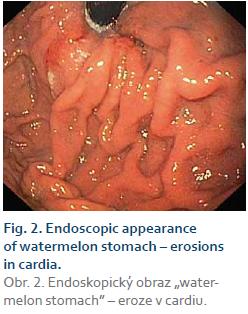