A 58-year-old patient was admitted to hospital due to abdominal pain, gastric ulcer and deterioration of blood liver test results. Multiple hepatic lesions suspicious of metastatic process were found on the abdominal CT, as well as lymphadenopathy and packets of lymph nodes, mainly in the retroperitoneal area, the peripancreatic area and the distal part of the stomach. Pulmonary lesions suspicious of metastatic process were also described on the CT. Papillary gastric adenocarcinoma from the prepyloric area was confirmed by histopathology. As the disease was disseminated, prognosis was poor, the oncologist did not approve oncology treatment and we continued with treatment in the sense of the best supportive care.

Gastric carcinoma is the fourth most common malignancy worldwide (989,600 new cases per year in 2008) and remains the second leading cause of death (738,000 deaths annually) of all malignancies worldwide [1]. There is a wide geographical variation in incidence, with more than 50% of all new cases occuring in developing countries. The high-risk areas are East Asia (China and Japan), Eastern Europe and Central and South America. The low-risk areas are Southern Asia, North and East Africa, North America, Australia and New Zealand [2].
In the Slovak Republic, according to official data from the National Office of Medical Information, the latest incidence rates indicate an increase of cancer cases for both sexes. In 2011 the total number of registered cases totalled 32,218 new cancer cases, 16,315 cases in males and 15,903 cases in females. This increase and the high occurrence in males are caused mainly by non-melanoma skin cancer, colorectal, prostate and lung cancers. In females, the increase of the overall number of cancer cases was caused primarily by breast, non-melanoma skin, female genital organ, colorectal and lung cancers and to a lesser extent by other cancer sites [3].
Over the past half-century, Lauren’s histologic classification of gastric carcinoma has largely been used. Intestinal type and diffuse type adenocarcinoma are the two major histologic subtypes, with relative frequencies approximately 54% for the intestinal type, 32% for the diffuse type, meanwhile the indeterminate type remains present rarely, with a frequency of 15% [4,5]. There are indications that the diffuse type gastric carcinoma is more often seen in females and young individuals [6,7], while the intestinal type adenocarcinoma is more often associated with intestinal metaplasia and Helicobacter pylori infection [8–10].
The 2010 World Health Organization classification recognises 5 major histologic patterns of gastric cancers: tubular, papillary, mucinous, poorly cohesive and mixed, in which the most common type is tubular, whereas papillary adenocarcinoma is uncommon [11]. Tubular adenocarcinoma is the most common histologic type of early gastric carcinoma (Tab. 1). It tends to form polypoid or fungating masses grossly, and histologically demonstrates irregularly distended, fused or branching tubules of various sizes, often with intraluminal mucus, nuclear and inflammatory debris. Papillary adenocarcinoma is an uncommon tumour, characterised by finger-like projections lined with neoplastic columnar cells surrounding a fibrovascular core, and associated with small micropapillary and tubular components in some tumours [12]. Both papillary and tubular adenocarcinomas are also grouped as intestinal   (vs. diffuse, according to the Lauren classification) [12] or differentiated (vs. undifferentiated, based on the Japanese classification) [13] gastric carcinomas. Mucinous adenocarcinoma accounts for 10% of gastric carcinomas. Histologically it is characterised by extracellular mucinous pools, which constitute at least 50% of the tumour volume. The tumour cells can form glandular architecture and irregular cell clusters, with occasional scattered signet ring cells floating in the mucinous pools [14].

A 58-year-old patient, with very little patient history, was treated only for arterial hypertension. About 2 months ago, a phlebothrombosis of the left lower limb was found and the patient was given a therapeutic dose of low molecular weight heparine. The surgeon who diagnosed phlebothrombosis did not send the patient for any other examinations in order to rule out malignancy. Later, he was seen by a gastroenterologist for abdominal pain in the upper area, which took about a month. The pain was not permanent and it was not accompanied by loss of appetite. Abdominal ultrasonography showed diffused hepatopathy – the liver was enlarged, the surface was bumpy with nodular changes, mostly in the left lobe. The parenchyme of the liver had a granular echotexture, there was a lymph node in the area of the spleen hilus with a size of 12 mm. Laboratory findings showed elevated liver enzyme activity (gamma-glutamyltransferase (GGT) 7.27 μkat/L, alkaline phosphatase (ALP) 2.91 μkat/L), the results of oncomarkers and markers of viral hepatitis were not yet available. The patient strictly denied any abuse of alcohol or drugs, he used only treatment for arterial hypertension and from an angiologist – antibiotics (Zinnat), analgetics (Algifen) and low molecular weight heparine (Fraxiparine). Endoscopy of the upper gastrointestinal tract was performed, an ulcer of a size of 6 mm was diagnosed on the upper side in the prepyloric area, with no bleeding or macroscopis abnormalities, Forrest III (Fig. 1). Therapy of proton pump inhibitors (PPI) was prescribed as well as silymarin and ursodeoxycholic  acid.
After one month, the pain became more consistent and laboratory findings showed coagulopathy (Quick test 59.6%), with deterioration of activity of the liver enzymes (GGT 31.20 μkat/L; ALP 8.19 μkat/L). The endoscopy was very similar to the previous examination, there was an ulcer on the upper side in the prepyloric area with massive peristaltic waves. The patient was admitted to hospital and abdominal CT was completed with surprising findings – multiple areas in the liver suspicious of metastases with partial central necrosis, sizes 10 to 38 mm, hepatomegaly, lymphadenopathy and packets of enlarged lymph nodes with necrosis and infiltration mainly in the area of the proximal retroperitoneum, peripancreatic area and area of the distal stomach, partial infrarenal retroperitoneum and partly in the mesenterium (Fig. 2 and 3). Circular thickening of the wall was described in the area of the pylorus (Fig. 4). Even small ascites and pulmonary lesions, suspicious of metastases, were also described on the CT (Fig. 5). The patient was treated by parenteral PPI, rehydration therapy with analgetics, and opiates were added to the treatment after the CT findings (Transtec – initial dose 25 µg, later 50 µg every 72 hours). Due to elevated inflammatory findings (C-reactive protein (CRP) 73.3, 96.3, 127.2 mg/L, white blood cells 11.3, 13.0, 9.4, 10.6, 12.3 10^3/µL) widely affecting antibiotics were also prescribed (Amoksiklav, Ciphin). The body temperature of the patient was normal, the results of cultivation from the urinary and respiratory tracts were negative. It was supposed that the elevated inflammatory findings were part of the paraneoplastic process, the same cause was attributed to the lower limb phlebothrombosis, which persisted despite treatment. Ultrasonography showed dilatation of the vena poplitea bilaterally with thrombotic content, on the left limb partial thrombosis in the fossa poplitea in the length of 50 mm, on the right limb almost complete thrombosis in the middle and distal parts of the vena poplitea, collateral circulation was detected. The markers of viral hepatitis B and C were negative (Anti HBs negat., HBsAg ELISA negat., AntiHCV negat.), the levels of two oncomarkers were elevated (CEA 103.1 µg/L; CA19-9 was 698.9 kU/L, alpha-fetoprotein 2.3 µg/L). The primary origin of the process was supposed to be in the stomach, samples were taken by endoscopy from the affected area. In the prepyloric area of the stomach an ulcer was visible with massive peristaltic, the pylorus was deformed, the area of the bulbus and duodenum D2 were not affected.
The patient was discharged during the period of waiting for the results of the histology, but several days later he was readmitted due to deterioration of his overall condition – loss of appetite, abdominal pain and malnutrition with development of ascites and jaundice. Laboratory findings showed signs of hepatorenal syndrome (urea 10.6, 17.9, 22.1 mmol/L, creatine 119, 266, 346 µmol/L; conjugated bilirubin 93.4, 66.6 µmol/L, aspartate transaminase 4.24 µkat/L, alanine transaminase 0.77 µkat/L, GGT 21.41 µkat/L, ALP 7.66 µkat/l, CRP 165.7, 209.9, 223.8 mg/L). Parenteral rehydration therapy with spasmoanalgetics and PPI were given, but with only slight improvement. Well-differentiated papillary adenocarcinoma grade I was confirmed by the histolopathologist, with local micropapillar surroundings, without the production of mucus (PAS, alcian blue), with imunoprofile: cytokeratine 7+,cytokeratine 20–, CDX2+, MUC2–, MUC5AC+, MUC6+, PAX8–, CD10–, RCC–, napsin–, Ki67 in hot spot approximately 80%, receptor HER2: HercepTest 3+, in other words excessive expression of a moderate to severe degree (Fig. 6). The presence of H. Pylori was not described by the histopathologist. Immediately after obtaining the results of the histology, the oncologist was consulted for the possibility of treatment. Due to the dissemination of the disease and deterioration of the patient’s overall condition, oncology treatment was not approved and we continued with treatment in the sense of the best supportive care. The family was informed of the character of the disease and of the prognosis, the patient passed away shortly thereafter, without autopsy.

Gastric carcinoma does not come de novo from normal gastric mucosa. The first step in an oncological change is usually gastritis, which might start the process of carcinogenesis by exogenous and endogenous carcinogenes in certain persons at increased risk. Despite declining incidence and the improvement of the diagnosis and treatment of early carcinoma, which has led to a better survival rate, the prognosis for advanced gastric carcinoma remains poor. There are many factors that influence the prognosis and survival data, the most important being location, lymphovascular invasion and histomorphological type [15].
An accumulation of genetic and molecular abnormalities occurs during gastric carcinogenesis, including the activation of oncogenes, overexpression of growth factors/receptors, inactivation of tumour suppression genes, deoxyribonucleic acid repair genes and cell adhesion molecules [16], loss of heterogenecity and point mutations of tumour suppressor genes, and silencing of tumour suppressors by CpG island methylation [17]. The revelation and understanding of the molecular events and pathways have led to the application of molecular pathology in prevention, early diagnosis, tumour classification and therapeutic intervention [18]. Human epithelial growth factor receptor 2 (HER2), a member of the human epidermal growth factor receptor family, is a proto-oncogene located on chromosome region 17q21 [19]. It encodes a 185 kD transmembrane tyrosine kinase receptor protein that regulates signal transduction in cell proliferation, differentiation and survival [20,21]. HER2-positive gastric cancer tends to be associated with a differentiated histology, particularly papillary adenocarcinoma [22,23].
Early gastric carcinoma is defined as invasive carcinoma confined to the mucosa and/or submucosa, with or without lymph node metastases, irrespective of tumour size [24]. The prognosis for early gastric carcinoma is excellent, with a 5-year survival rate as high as 90% [25]. By contrast, advanced gastric carcinoma, which invades the muscularis propria or beyond carries a much worse prognosis, with a 5-year survival rate of about 60% or less [26].
Papillary adenocarcinomas are usually well differentiated, with exophytic growth, characterised by papillar epithelial projections on the fibrovascular stem. Cellular athypia and mithotic index are similarly variable. The invasive component is often clearly demarked and is associated with massive inflammatory reactive cellulisation. The incidence is between 6 and 11%, mostly in elderly patients. The location is usually in the proximal part of the stomach, with distant metastases in the liver and lymphatic nodes. A poor prognosis for patients with papillary gastric carcinoma is associated with the presence or recurrence of liver metastasis [27–29].

Papillary early gastric carcinomas are uncommon but have a higher propensity in elderly patients, proximal gastric location, elevated growth pattern, deeper invasion, higher lymphovascular invasion frequency and more nodal and distant metastases in comparison with tubular early gastric carcinomas [30–32]. There is a poor prognosis for patients with the presence or recurrence of liver metastasis and worse overall 5-year survival rates, compared with tubular early gastric carcinomas [27]. This case report shows how important it is to examine thoroughly every patient with phlebothrombosis, which may raise suspicions of malignancy, especially in the elderly. Endoscopy with biopsy should be performed immediately if there is even a slight suspicion of malignant process. All these procedures may lead to earlier diagnosis and possibly, a better prognosis for the patients. 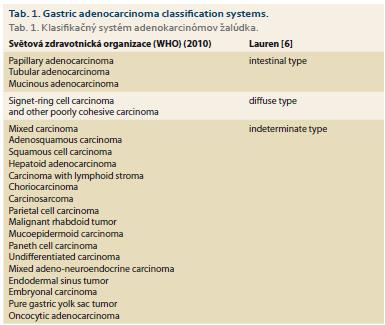 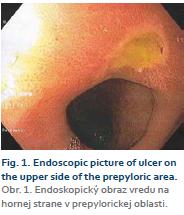 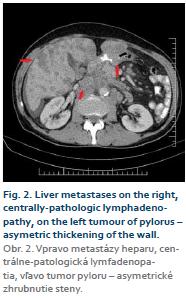 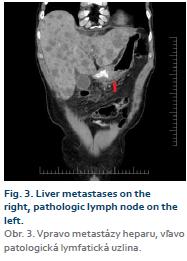 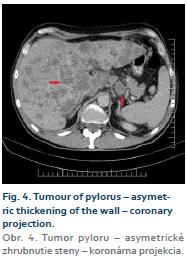 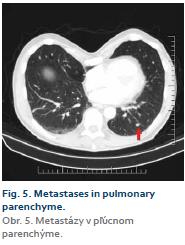 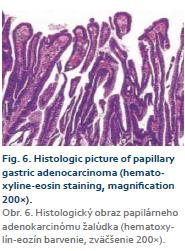